One small, square box of revenge

To me, blackout poetry represents an opportunity to make mischief out of boring things like financial columns and interviews with Arnold Schwarzenegger. You excise the dull parts with swaths of ink or paint. It’s like a secret code created with gleeful defacement.

You can see how I made a “rough draft” in pencil, but then couldn’t erase it because that would’ve effectively murdered the newsprint.

Poetry, in general, isn’t something I write. But I can never resist mischief (or trickery, or sneakiness*), and apparently I created a lot of blackout poetry a few years ago. I posted another blackout poem over a year ago. I found these few poems while looking through an old art journal, and had one of those “Oh, cool!” moments that come around sometimes when looking through old things you’ve forgotten about.

Or even things that aren’t so old. If you write enough, there’s a point when your brain can’t hold it all in, and blog posts from maybe two months ago read like new. 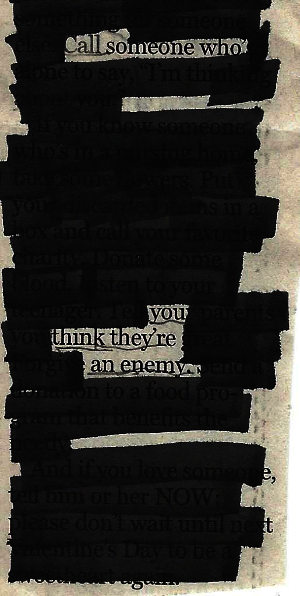 If I twist my brain hard enough, I can justify this as being actual advice. Of some sort.

I thought I’d share these, because out of all the blackout poetry I found, these were the ones that came out surprising well. Or at least the ones that didn’t make me think, “Holy crap, how can anyone over seventeen compose something so depressively emo?”) 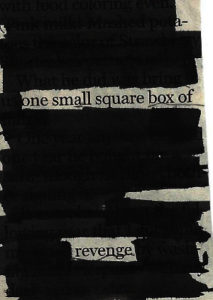 I imagine it’s wrapped in elegant paper the color of titanium.

And the idea of a small, square box of revenge, whatever that is, amused me.

*Despite the fine distinctions between trickery, sneakiness, and mischief, I have tags for both sneakiness and trickery, and most of the posts overlap. Speaking of sneakiness, I just learned I’m the top Google result for “Kris Bowser sneaking food into movie.” For reasons..