That awkward moment when you’re stuck in goblin jail

You should figure that if a group of sneaky Halloween goblins gives you a map to anywhere, there’s going to be something tricky about it.

This is the first preview of my upcoming middle-grade chapter book Pumpkin Goblins. It’s a Halloween adventure story. In the scene I read here, my main character, Amber, finds herself in goblin jail after an incident with a goblin map.  I’ve seen other authors post audio of themselves reading their work, and I enjoyed it. This is despite the fact that I’m not patient enough to listen to an entire audio book.

Shoving aside my introverted tendencies and my Massachusetts accent*, I decided to do the same.

Hi, I’m Kris Bowser, the author of Pumpkin Goblins. My main character, Amber, is having the worst Halloween ever. This scene is the predicament she finds herself in after some trouble with a magic goblin map.

Amber sat in a jail cell that had been carved from an enormous pumpkin, and smelled like it. She knew she should be afraid, but couldn’t shake the feeling that it was time to mark out a face on a would-be jack-o-lantern, and that toasted pumpkin seeds would be coming out of the oven soon. The cell had bars that looked like twisted, ropy wood, but held firm like iron. Maybe she should be scared of never getting free, but pumpkin jail was at least not so boring as spending the evening watching Dean and Sybil play video games.

A soft, quick noise came from the tiny window high on the cell’s outer wall. Clinging to the window bars, forearms tight to hold himself up, was the leader of the three goblins who had come to her house. Finally, some answers.

“You!” Amber exclaimed. The goblin was the closest thing to something familiar and friendly in what felt like days, and she had a lot of questions for him. “Are you getting me out of jail?”

“Confess to nothing. Don’t mention me.”

“Do you have it still? Right pocket. No, other one.”

She heard the thunk sound of a goblin kicking the outside of pumpkin jail in frustration.

“Where is it? Where?” His head darted frantically. “Confiscated!”

The two goblin fists released the bars, and he dropped out of sight.

Amber leapt to the window. “Wait!”

Somehow, he had already made it ten feet away. He turned back. “Don’t worry. Don’t worry, don’t tell, for Halloween’s sake. We’ll get you out.”
Then he ran off.

I also have some line art for the cover to show off. The illustrator, Justin Motta, wanted me to make sure that you know the art is still in the early stages. Because this was clearly important to him, I’ll say it again, in larger letters:

The cover art is still in the early stages. 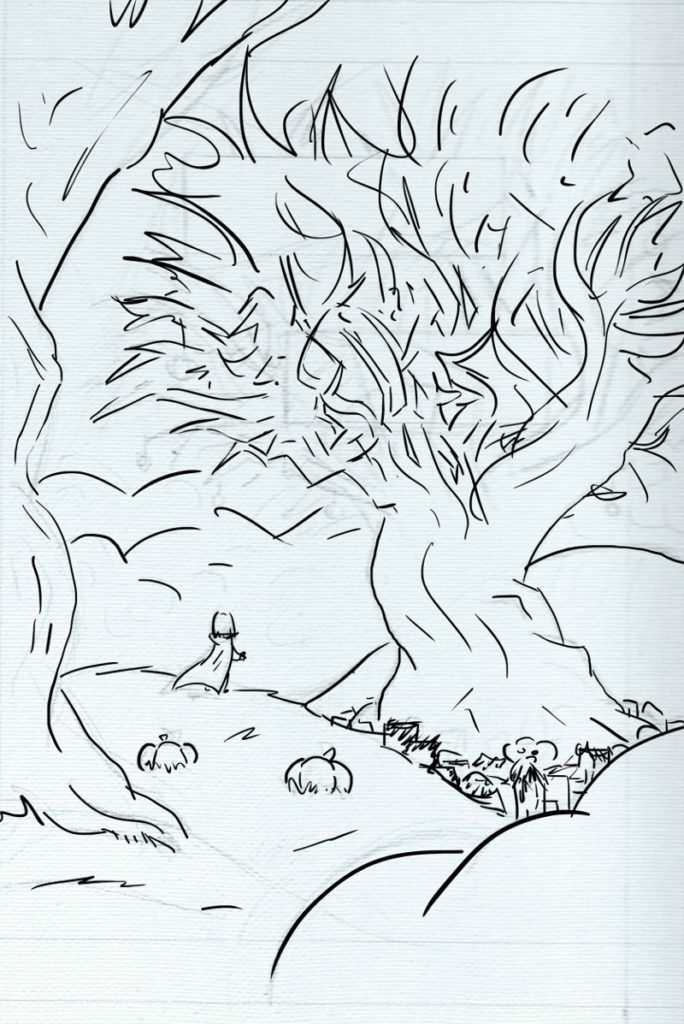 Can you image how awesome and Halloweeny this is going to look when there are colors?

The cover art is still in the early stages.

*Honestly, my accent isn’t heavy anyway, and I’d rather have a Massachusetts accent than vocal fry, which I learned about while googling things like elocution and audio recording software. I actually tried speaking with a vocal fry after watching the videos. It’s uncomfortable.