Last Monday, I posted The Ultimate Smoothie of Power.

Shortly after this, one of my readers informed me that I needed to post more.

“I’ll have you know that I added a new post yesterday,” I replied with a great deal of haughtiness, self-satisfied in the knowledge that this conversation was occurring the day after I had actually posted something.

“What? I didn’t know that.” He sounded surprised. I don’t know if that was because I’ve put out so few posts in 2015, or because he’s such a fervent and fanatical follower of this blog (for thrills like the alliterative spectacle you witnessed previously in this sentence) that he was shocked at having missed a post.

Or maybe, he has a room full of assorted elves and capuchin monkeys sitting in cubicles and refreshing blogs he likes.  And now, one of those capuchin monkeys is going to have to go out and get a crappy retail job because her clever little fingers were nicking a soda when last Monday’s post went up.

He did say he tends to forget RSS readers exist.

In any case, I informed him of the various options available for following this blog.

Here’s what I told him: 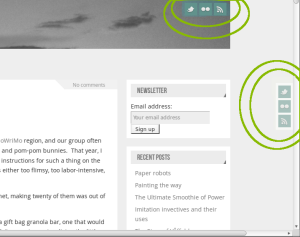 And there’s another RSS icon on the sidebar, and another in the footer. Such excess!

Click any RSS icon to access the blog’s feed. Since I have Mozilla Firefox, when I do this I have the option to follow this blog from my browser with live bookmarks. Mozilla Thunderbird also has the capability to track RSS feeds.

You can copy and paste the feed’s address into the RSS reader of your choice. I’ve been using Feedly since the demise of Google Reader. You can paste the RSS feed directly into their search bar.

No, it’s not just you. The follow-by-e-mail icon in the sidebar isn’t the easiest thing to find.

Click the e-mail icon on the sidebar to receive my posts directly in your e-mail. Although 2015 has been a light on posts so far, I’m aiming for three per week.

One of the trials of using WordPress for my site has been picking through the gazillions of available plugins to choose the best ones. I do my best to test all of them, so I can confirm that this will not make you sign up for a membership anywhere, and you can unsubscribe easily. 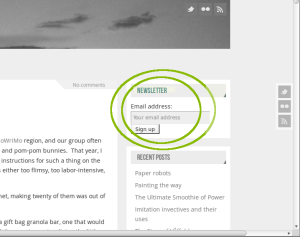 Someone with her own newsletter should have a better caption.

This exists mainly for those interested in receiving news of my fiction as I release it. To be honest, this is in the very early stages, and I’m not totally sure what other content I’d like to include in the newsletter. However, I plan on including links to at least a small amount of blog content.

Posting links to my blog on social media tends to make me feel kind of spammy and awkward, so I haven’t done a lot of this. Generally, I only do so if there’s a post I’m particularly proud of, if a post sums up my current state of mind better than a status update would, or if I wrote something that I truly think the people who have followed or friended me would enjoy.