The camera ate my color

Perception and memory interest me.

I took the first photo at the community garden where my partner has a plot, and it looks much duller than I remembered. This became even more obvious when I sliced off the top to use for my website’s header.

Part of the blame for that falls to my digital camera, which does poorly with low light and action, and is also skittish around children and wolves. 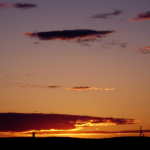 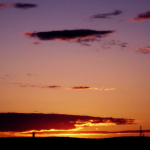 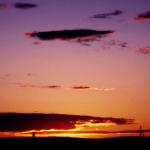 Part of it has to do with my own perception. How can a flat picture on a screen compare to standing on a hill at the onset of a cool spring night, the air rich with plant smells? I’m sure the sum total of impressions from my other senses influenced my memory.

I punched up the color in this picture three times. While the first picture is the one I took, and the third one matches my memory, the second one might be closer to reality. The fourth one isn’t quite hyperreal, but it looks more like an idealized, imagined sunset.

Even though number two is probably most accurate, three is more truthful in a way. It still can’t capture the energy of being alive with cold wind in your face, but the extra vibrancy conveys a bit more of the energy I remember.

They say that cameras don’t lie. But that depends.  Do you count a lie of omission as a lie?