Why would I until the end of National Novel Writing Month to share a plotting exercise with you? Mostly because things happened, and I didn’t get around to it earlier. But also because there’s room for plotting and planning towards the middle and end of the month. At the beginning of NaNo, there’s always a lot of talk about planning versus pantsing: do you plan before you write, or do you write by the seat of your pants? Most of us are in between. I like to start off with solid character and setting details, and I can wing it for quite awhile before I have to stop and figure out how things come together. 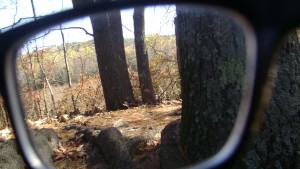 Why this picture? Do I need a reason? Can’t we just be happy I didn’t attempt to use it to create an extended metaphor about seeing where your plot is going?

Every November is National Novel Writing Month, a time when thousands of people all over the world challenge themselves to write a 50,000 word novel in one month. If this is the first you’re hearing of it, fear not. There are twelve days left. You can take two days to stock up on index cards and candy bars, one hour to do some Random Rapid Plotting, and ten days to become a writer-hermit.

I created this plotting exercise for my local NaNoWriMo group to use at our Novel Planning Party in October. Since we also go over character and setting, there’s about an hour to do the plotting exercise. The first time we ran this event, we used Holly Lisle’s “Notecarding: Plotting Under Pressure,” which is also found in Mugging the Muse. It’s a lot of fun, and I’ve used it successfully for three of my favorite November novels. When I printed it out for the first time, I realized that the instructions are lengthy, which is tough with the time constraint of the planning party.

The problem with having an hour to plot a novel is that any method comprehensive enough to be good is going to take longer than an hour. And since the event is in mid-October, we all have longer than an hour to spend plotting. So while we need to have a plotting method that can be done in a hour, it’s also unnecessary in the larger scheme of things.

Two years ago was the first time I tried making my own plotting exercise, and this is what I came up with. It basically involves throwing whatever random stuff is on your mind into a chart, linking things together in a more cohesive, scene-based form, and extrapolating from there. Drawing on the chart in colored pencil to make connections was fun, as well as a nice visual change from my normal novel notes. I think it’s a decent enough exercise, and I came up with a fun plot when I did a test drive on it. It was a contemporary fantasy with an electrician-wizard tracking down a spirit in the power lines, but there were also subplots with a sinister pet groomer and delinquent teenagers, which are my favorite type of teenagers.

However, I didn’t actually use it to plot my own novel that year. The thing is that doing a one-hour plotting exercise when you actually have several weeks to work things out at a more reasonable pace feels slapdash. There’s a such thing as overplanning, but if you’re starting plotting with a few weeks before November, there’s time to let plot ideas percolate and come together naturally.

There are two things I think Random Rapid Plotting would be awesome for.

The first, and the reason I still decided to post this so late in the month, is planning middles and ends. Ends are tougher than beginnings. Everything has to come together and make sense at some point. I had interesting results when I tested this with my current work-in-progress. It helped me think of new ways to put my characters in different situations and connect seemingly unrelated events. It’s a nice way to tie in bits and pieces I came up with in the earlier part of the month.

The second is deciding, at the very last minute, that you don’t want to go into NaNoWriMo with zero planning. Maybe it’s 11:00p.m. on October 31, you’re in the middle of a horror movie, and you remember that NaNo is starting in an hour. You don’t want to fly seat-of-your pants, but if you take your time to plan, you’ll be 10,000 words in the hole by the time you start writing.

That’s what I would use it for, anyway. Last minute plotting, and fast. So I guess the name was appropriate.