In addition to bakery fire burns, bruised jaws, and deep gashes, I can now add printing acid injuries and goat injuries to the list of bodily traumas I’ve had to Google in my Stars Fall Out research.

I’m not one of those people who believe that swearing signifies a weak vocabulary, but today I edited eight “damns” out of a story to submit to a clean market, and I had a lot of fun figuring out alternatives. Confounded alternatives.

What does a 1,125 page manuscript need more than anything?

It’s daunting, but when I’m done, I’ll be able to love the first part of the story as much as the ending.

Even if it doesn’t have nearly as many fires.

HP Officejet Pro, 95 pages in: Align the printheads. DO IT DO IT NOW.

I’ve found I have two methods for developing my magic systems in Stars Fall Out, and I’ve used each one exclusively for a single type of magic. First there’s the Painstaking Research method, which I’ve …

In these days of coronavirus isolation, I already miss my Thursday morning writing routine at Dunkin Donuts.

The Grammarly browser extension now has a feature that detects tone, or at least attempts to, in much the same, fumbling way that the Grammarly software attempts to do anything.

It labeled a flat-out rant I’d written as having an “appreciative” tone.

I started writing a Halloween short story and there’s a spirit creature that I realized is basically a cross between Salad Fingers and the Phantom Gourmet, a local restaurant review TV show that is a …

Here are a couple things I’ve learned about while doing worldbuilding research for Stars Fall Out:

The Roman month of Mercedonious. Learning more about the history of intercalation (inserting extra days into the calendar, such as in a leap year), provided the inspiration for me to fix a story problem. I have a section of Stars that, timing-wise, felt weird in relation to the rest of the story. I decided to run with the weirdness; I made them intercalated days called for on the authority of one of the Grand Oneiromancers. One of those “can you believe this law is still on the books?” kind of things.

I also learned how to convert between different number base systems. I’ve always thought it would be cool if we had a base 12 system rather than base 10, so I gave one of the cultures in my story a base 12 system, and another base 9. Now I’m trying to make it as hard as possible for them to change currency, which is adding some nice color to a scene in the bakery when a guy comes in with imperial money.

Also, history of the number zero. Unrelated, for my purposes.

This is the result of my hands-on plot-fixing session the other day. It led to me writing a scene I came up with twelve years ago, but hadn’t figured out how to write (in part because of Stars Fall Out’s long, weird history). I plotted and wrote it in an hour-and-a-half, and it’s improved two main characters, my worldbuilding for the city of Nirsuathu, and even the ending.

I slammed my laptop shut, wished Dunkin Donuts were more conducive to victory laps, then drove to work while blasting “Outsiders” by Franz Ferdinand, which is part of my Stars playlist, and is quite a bombastic song for representing a character who’s been stuck in Nirsuathu for months.

If I ever mention “going through a pack a day,” it will probably be in reference to index cards. I keep finding more uses for them. 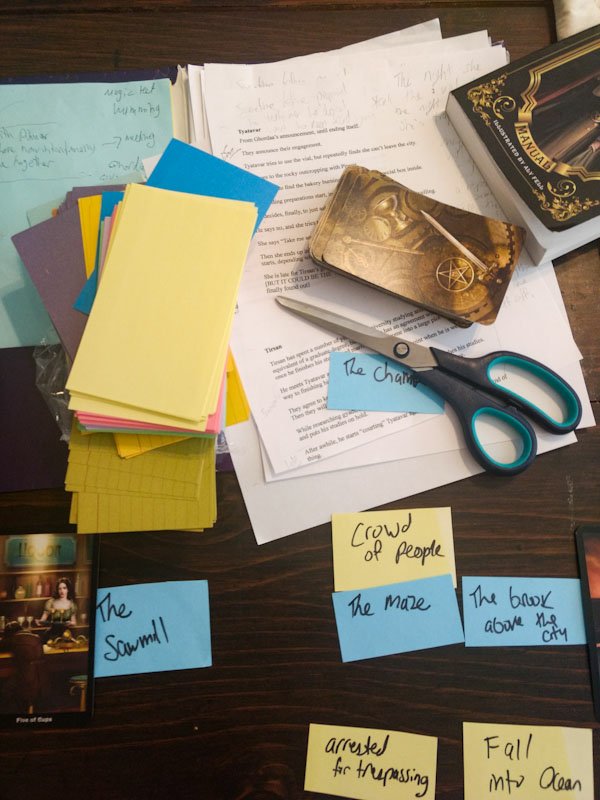 Index cards, tarot cards, scissors, two rolls of tape, and two plot outlines, one for reading, and one for chopping into pieces.