With all the constantly created recipes on food blogs, constantly cloned onto other food blogs, and constantly combined with other recipes to form mutated recipe-spawn, it shouldn’t be too hard to find a recipe. Yet once again, The Internet failed me. Actually, this happened twice in the past few weeks, but I just don’t feel that drive to write a blog post about the Fruit Dip Disappointment.

When I posted about the Banana Gingerbread Granola I made awhile back (by adapting another recipe), I referred to myself as a “granola curmudgeon.” That’s true, but it also implies that I have this one quirky thing where I’m super picky about granola, but pretty chill about other foods, and maybe other things in general.

If I were rich*, I might say things like, “Gracious! You mean to say your chef used those geese in the park who so haunt my morning constitutional? In the foie gras? How creative!” And then I would share a sidelong judgmental glance with my blonder-than-blonde lady friends.”

I’m picky. Not about vegetables, or trying new foods, but about quality. That’s how I was raised: no Hamburger Helper, no Shake ‘n’ Bake, and no freakin’ cake mix. Baloney was, and still is, an object of derision for my dad, an ersatz almost-food he pities others for eating because they don’t know any better. We didn’t eat anything fancy. My parents never ranted about how unheathy processed food is or talked about organics**. It was just an unquestioned fact that we had homemade cake on our birthdays. The cake was not a lie.

Learning to cook, after being raised in such an environment, only made me pickier. I developed the observational skills to taste things and complain about how little nutmeg they contained. I’ve even developed a reputation as a good cook, but the truth is that I’m an average cook who’s damn picky. 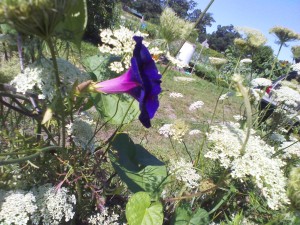 Did you want to see a picture of mushy, nut-tinged rice? Yeah, that’s what I thought. You’re welcome.

So I knew precisely how peanut buttery, sweet, and tinged with cinnamon I wanted my rice pudding, and I rejected score after score, tab after tab, of online recipes. Well, I looked at seven or so, anyway. Any rice pudding recipe calling for uncooked rice failed immediately. Because making rice pudding by starting with uncooked rice should be an activity reserved for some circle of hell where poor souls are punished by stirring slowly-absorbed liquid until the implosion of time at the end of the universe.

That’s how long it takes to use uncooked rice. Eff that.

In the end, I don’t know why I bothered to check the internet for a recipe, since it took me all of two minutes to figure it out for myself.

To make, heat all ingredients except vanilla in a pot on the stove.  Use whatever heat your stove needs to be at to make this simmer and bubble, but not violently or in a volcanic manner which will result in lava rice exploding onto your face.

Stir very frequently, until it thickens, then add the vanilla.

It might not win the internet awards for best or fanciest, or Healthier than Thou, but it is the one my pickiness demanded.

*Ok, rich, verbose, and living at least one hundred years ago, in a place with parks. I live in the sticks. Everything is the park. And there are geese everywhere.