I’m a granola curmudgeon. “Call this granola? It’s all oats. Used to be they put nuts in granola but not these days, nosiree, get maybe two nuts in a bag… mutter mutter…”

There’s only one brand of store bought granola I eat, and there are only two granola recipes I use. I love granola with interesting flavor and texture combinations, but most of the time when I try to look up granola recipes online, I become irate and go back to my two standbys. The recipes either have too many oats, too much sugar, or not enough fat. Or, the recipe author is being condescending/cutesy, which makes me antagonistic towards the granola recipe, even if it’s perfectly good. Or, they’re being condescending/cutesy AND using too much sugar AND using too little fat AND telling me that I will not be able to tell how little fat is in the granola, which is not true because I’m a granola curmudgeon and I can always tell. 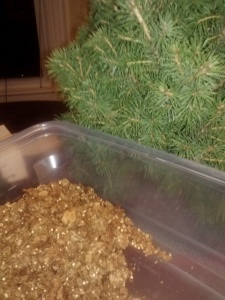 Anyway, one of my two standby granolas is this Pumpkin Spice Granola recipe. I make some changes to it, but it’s a solid recipe on its own. Or it was, anyway, until I became a crazed ginger addict.

I’ve always been a big fan of ginger, but lately it’s gotten out of hand. I would steal your TV and sell it and use the money to buy crystallized ginger on the streets, and I would refer to it as “ging” or “crys,” which would be a little confusing since my name is Kris. The last time I made the Pumpkin Spice Granola, I added powdered ginger, and then quadrupled the ginger.

The fact that it’s now Christmastime only means that it’s socially acceptable for me to eat ginger like a maniac because Christmas is all about gingerbread everything when it isn’t all about peppermint everything or eggnog everything.

Since I am both a granola curmudgeon and a ginger maniac, and I will only use two granola recipes, I had to use the Pumpkin Spice Granola recipe as the template when I decided I needed to make Banana Gingerbread Granola.

So. Here is how to make that.

Preheat the oven to 325 degrees. Make it Fahrenheit, otherwise you’ll be even more grumpy about your granola than I am about most granola. Plus, you’ll have melted off your face.

Throw the following into a large bowl:

A couple pinches of salt

Chop a ton of crystallized ginger. Pack it down tightly into a 1/2 cup, like you would with brown sugar. Mix into the dry ingredients.

Measure and rinse 1/2 cup uncooked quinoa, unless you are positive it’s pre-rinsed. This isn’t like rice. Sometimes people say you have to rinse rice, but that’s a lie. Quinoa contains bitter saponins, and unrinsed quinoa will ruin your granola as surely as if you had set the oven to 617 degrees Fahrenheit, aka 325 Celsius.

Mix the quinoa into the granola.

Mash a couple of very ripe bananas. Mine came to about 3/4 of a cup.

Mix together the mashed banana with the other wet ingredients:
3 tablespoons ground flax

Also, I usually measure the hard coconut oil into a 2 cup glass measure, then put it into the oven as it heats. Then I measure the other wet ingredients on top of it. Fewest dishes possible.

Mix the wet ingredients into the dry ones.

Cover a couple baking sheets with parchment paper. Or maybe just grease them. Then spread out the granola onto the sheets. Sometimes I plan my time poorly and end up throwing the granola mixture into the fridge overnight before I actually cook it. Because of this, I learned that granola forms larger clumps more easily when you refrigerate it first.

For some reason, granola cooking directions never work out for me. Here’s what I do instead of whatever the recipe says:

Cook the granola for 20 minutes, then stir it. You should see steam come up when you stir it. This will not happen when the granola is fully cooked. Keep the granola in the oven at 325 (yes, we’re still using Fahrenheit, good question) until it starts to brown some, checking and stirring every ten minutes at this point.

Once it gets a little browned (it should be slightly dry as well), turn the oven down to 200. Continue to check and stir every ten minutes. At this point, it’s just dehydrating until most of the moisture is gone.

Let it cool on the baking sheets before putting it into a container. Because it has plenty of fat and it’s been well-dehydrated, it will stay good for weeks. If you want to store it long term, throw a dessicant pack into the container.

*I get angsty about having to measure out tiny amount of spices, like 1/64 of a teaspoon nutmeg and a micron of cloves. Last year I mixed up a bunch of gingerbread spices from a cookie recipe and put them into an old spice container so I wouldn’t have to deal with it. I think this was 4 tablespoons ginger and 4 teaspoons each of ground nutmeg, cloves, and cinnamon. If you don’t want to do this, reduce appropriately. It doesn’t have to be exact.