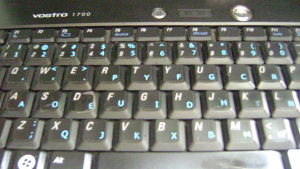 A keyboard set to Dvorak is a great way to mess with people using your computer. Cy jab anor x. a p.annf ocmln. .bjpflycrb ofoy.mv

The other night I found myself with a bit of wrist tendonitis. It was the final day of Camp NaNoWriMo. I had 3500 words to go, and seven hours to write them in. Not really an insurmountable obstacle, until my wrist flared up. I had a lot of trouble with wrist tendonitis about five years ago, and after doing some research, I decided to switch to the Dvorak keyboard layout, which is supposed to be easier on the wrists. It was designed to be faster for typing the English language, with vowels on the left side of the home row, and the most commonly used consonants on the right side of the home row. The least frequently used letters, including J, my own personal Scrabble-bane, are all along the bottom, the most difficult row to reach.

I’ve never been sure how much the Dvorak layout helps alleviate wrist problems. Soon after switching over, I discovered that the source of my problem was all the Plants vs Zombies I’d been playing. The constant clicking was tough on my mouse hand. I stuck with Dvorak anyway. Though it took me awhile to adjust to it, I’m now a faster typist.  104 wpm, according to the typing test I took a minute ago.  Better than my QWERTY high of 86.

The other night, my wrist flare-up was from drawing right-handed. My rule is that if I have even the slightest hint of tendonitis, I don’t type. Maybe Dvorak is better than QWERTY, maybe not, but either way it can still irritate an already-aching wrist. Most days, protecting my wrists from worse problems (I’m a wimp. I’m not going down the carpal tunnel.) is more important to me than getting another 1000 words. But most days aren’t the last seven hours of Camp NaNoWriMo. I wanted to hit 29,998 words, and I was willing to do the unthinkable.

I was going to shut down Linux Mint, and boot into Windows 8 for a purpose other than playing games that I didn’t feel like configuring through Wine. I was going to try transcription software. Dragon Naturally Speaking was out of the question, because I’m poor. So by transcription software, I mean the default speech recognition application that comes with windows, used not with any kind of decent microphone, but with my computer’s built-in mic.

In order to make it understand what I was saying, I needed to use the same strategy that Avatar Aang used against Koh the Face-stealer.  “Show no fear. Show no emotion at all. Show no hint of a Massachusetts accent, and for fuck’s sake don’t speak as fast as a Rhode Islander.”

In between repetitive suggestions that I speak like a newscaster and improve my diction, a few of the sentences set off warning bells. 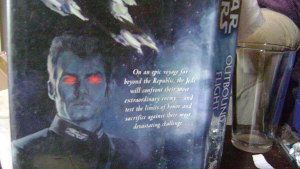 Mitth’raw’nuruodo, before he was Grand Admiral Thrawn. Similar to how my laptop is a nascent tactical wizard.

The training says that if you correct a mistake the software made, it’s “unlikely to make the same mistake again.” In other words, the speech recognition software is not only sentient, it’s better at life than the vast majority of all humans. Including myself.  It also says that the spelling dialogue, used for correcting words, is “very efficient and powerful.” Like a wizard, or Grand Admiral Thrawn.  When speech recognition software turns my laptop into a bona fide lifeform, this is going to be an inconvenient personality for it to have.  This is what file backups are for.

Although the software training appeared to go badly (and I also didn’t do all of it), I decided to attempt writing fiction with it. After all, I only had six hours left at this point, and I hadn’t shaved off any of those 3500 words.  I could go on at length about how stupid it looks when your dialog is surrounded by the words “quotation marks” instead of the real deal, or the many variations I had to go through for every single word. But I won’t do that. You can probably get the gist. It was like the longest game of telephone ever, where everyone playing is also on speed.

Still, the real reason I don’t want to persevere with transcription software (besides the fact that my wrist is now just fine), is the same reason I never tried it before now. Writing well is easier than speaking well. Why would I demote my writing down to the level of my speech?  With careful typing and a lot of rest, I was able to write most of the 3500 words.