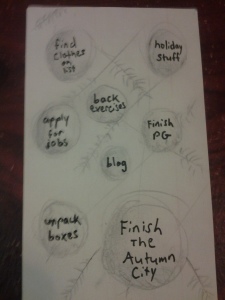 People with cats and children have it easy because they always have a fast answer to the question “What’s the one thing you’d save from a burning building?” But I’m so rotten at prioritizing and deciding that I can never come up with an answer to that question. It would be easy if I had a single, sentimental piece of jewelry from a long-dead relative that I was very close to, but I neither have such an item, nor do I actually like jewelry all that much.

One answer would be, “You’re not supposed to take anything with you when you flee a burning building.” A snarkier answer would be, “You chose your cats/children/catchildren, but that’s a plural, so pick your favorite.” But those make for crappy dinner table conversation. No one wants to talk about choosing fire safety over their waffle maker, Star Trek movies on VHS tape, or collection of Chinese food menus.

As I said in “Dungeons and Dragons and Depression” I have too many things I want to do, too many skills I want to develop, and I’m horrible at prioritizing. A few months ago, I had the idea to write up sort of an overview of the month ahead, what things were happening, and what I was prioritizing.

I wish I could say that I came up with the idea of drawing my monthly overview instead of writing it because I’m one of those adorably artistic people who fills sketchbooks with twee people-watching doodles and makes the shopping list they scribbled in the corner of the page look like a work of art because they have artsy, legible-messy handwriting rather than malformed tangles. But honestly, I have a lot of lists, and I couldn’t look at another vertical stack of shit to do.

So I drew diagonal lines, and wrote out the three most important things in the largest letters.

Then I added 13 more things, making 16 total. I told you, I’m bad at prioritizing.

Earlier this month, I made my December list.  I managed to get it down to eight things, which is still not effective prioritizing.  This time, I drew holiday orbs for each item, the biggest one being the most important.  I managed to do everything except the most important orb, which is because I severely overestimated just how bad December was going to be for completing that task (which is a rough draft of a novel).

It might not have been an overwhelming success, but it was progress.  As I think about my New Year’s resolutions and what I did and didn’t do in 2014, I’ll definitely be considering how far I need to go when it comes to prioritizing.