Even if the decorations are still up, we’re past the time period when it’s socially acceptable for me to put up a Christmas post.  But does anyone else find the concept of Elf on the Shelf a little sinister? Elf on the Shelf creeps me out, and not just because of its plasticky 1950s smile, or its overall vibe of cutesy, overbearing innocuousness.

The basic idea of Elf on the Shelf is that it’s a minion from Santa, sent into homes during the Christmas season to track children’s behavior. Sure, Santa sees you when you’re sleeping, and he knows when you’re awake. He knows if you’ve been bad or good, and probably a lot of other things that aren’t specifically stated in the song.

As a high level wizard, Santa has made it his job to know these things. With all the power at his disposal, he chooses to sit in his fortress at the North Pole, gazing into his crystal ball at children’s behavioral problems and tracking their circadian rhythms.

When I was a kid, if I fought with my brother near Christmas, I would be told to behave because Santa was watching. But that was ok, because I knew that Santa had been watching all year and would account for all data, even if it seemed like my parents weren’t. Santa knew all. He knew when it was really my brother’s fault, which was always. 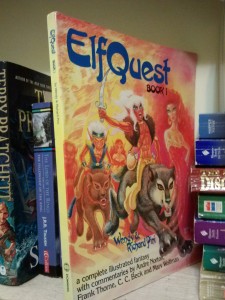 The only elf on my shelf.

Santa watches you the way a parent watches you, albeit with better magical surveillance equipment. He’s tall and distant, authoritative yet jolly, a benevolent giver of gifts. He’s part of a long tradition of telling kids to behave because a magical creature will know if they don’t.

Stories about bad things happening to wayward children have been around forever. “Stop your shit, or that fanged shadow-demon-thing in the forest is going to emerge from its lair and harvest your kidneys.” In our consumerist culture, it only makes sense that the horrible, bad thing involves deprivation of material goods.

New traditions appear, and old ones fade away. That can be for the best. Traditions also reflect the culture they come from, which is why I believe it’s worth looking at them with a critical eye and asking if they reflect something good. The story of Santa watching isn’t a perfect one. I’ve already mentioned the consumerist aspect, and those who are so inclined wouldn’t be hard-pressed to find other criticisms as well.

Elf on the Shelf is some combination of a snitch, a security camera, and a telescreen. It looks like a friend, but it’s there to do a job. It will betray you the instant you do something wrong. The intimacy of it, the fact that it’s up on a shelf in the living room, makes all the difference. I’m not exactly losing any sleep over it, but this is the kind of thing I find disturbing at a cultural level. While I don’t have kids, I am still invested in the health of the culture I live in.

So, if you are the type of person who doesn’t take down their decorations until January, know that your Elf on the Shelf sees you when you’re sleeping, he knows what you do on Martin Luther King Day, and he watches you watching TV.  And he eats nachos while watching you watching TV, eating nachos.

Coincidentally, a friend of mine posted this article about a day or two after I wrote my first draft on this post. At first I thought it was coincidence, but who knows. Maybe she snuck an elf on the shelf into my apartment when she helped us move.