Trying to get rid of clutter isn’t difficult because throwing things in a cardboard box is beyond the skill of the average human. It’s difficult because it’s not about getting rid of items, but rather about destroying alternate universes.

A bunch of beads and wires aren’t craft supplies you never used. They’re an alternate universe in which you wear badass wire jewelry that you’re too much of a diy punk to just buy from someone else. And in this universe, you don’t do that thing where you kink up the wire and then throw it back in the drawer because now it has a bunch of little micro-bends.

An old school ID from a school that you didn’t actually attend is an alternate universe in which you did go there. You transferred of your own volition, and felt good about it, and had different (i.e., actual) job opportunities when you graduated, and things are better in that universe. 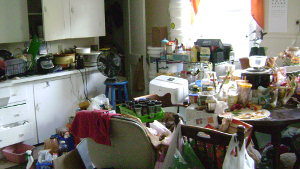 This is an alternate universe in which I never moved out of my messy old apartment. It’s not just some picture of my old apartment, ok?

I’m looking at a pile of crap on my desk right now. There are only a few things that can simply be put away without dramatics and wishful thinking. Everything else is an alternate universe, even if it’s not one that’s a major divergence from the established timeline. What kind of person, besides nihilistic madmen on Doctor Who, has the heart to go around wantonly destroying alternate universes? And the simple alterna-folk who live in them?

I can understand why books and articles on decluttering are so popular; I just sat down to clean my desk, and instead started to write about thinking about cleaning my desk.

The problem is that, from what I’ve seen, a lot of this advice is based around dubious mental tricks. You can see them in any women’s magazine in a dentist’s office.

Sally from Nevada sends us the following decluttering gem:
I like to get together with a friend and pretend I have terminal eyebrow cancer and need to sell all my wordly possessions to pay for an experimental Himalayan salt treatment. What would I still keep? What would I “sell” her to save my eyebrows?

Even advice like “Throw out anything you haven’t used in the last six months” is a mental trick. It imposes an arbitrary standard that has nothing to do with why you own a particular item, why should or shouldn’t get rid of it, and why you’re not going to. It also doesn’t make much sense if you apply it to tools. You might not use your precision screwdrivers frequently, but it doesn’t make any sense to throw them out just because your glasses or computer haven’t broken recently.

It’s tough to say goodbye to something that represents a possibility, even a possibility long past. I don’t have a handle on that at all, but I think the key is in keeping the things that are keys to places you still need to go from time to time.