Cookouts are a hotbed of danger, awkwardness, and yard games. It’s bad enough trying to sit comfortably at a sun-baked picnic table splattered in bird shit, but really, that’s only the beginning. With Labor Day in just two days, I figured that the penultimate entry of Humidfest 2014 would be an opportune time to discuss some of the unsavory qualities of outdoor barbecues. 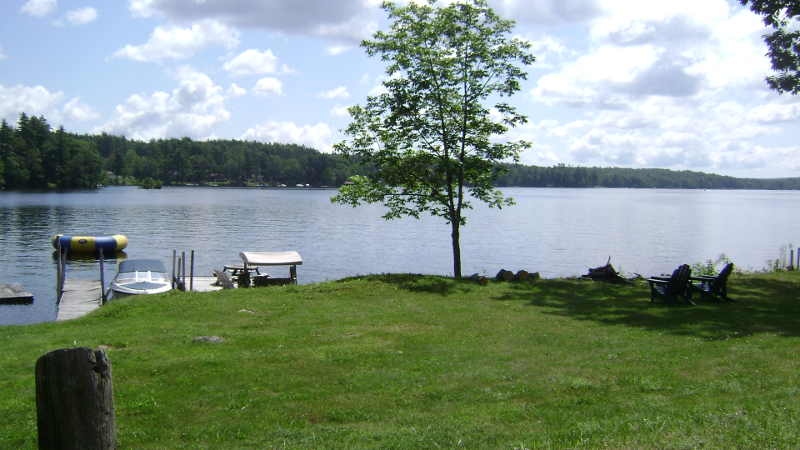 You are in less danger from the many drunken boaters on this lake than you are from every single thing that happens at a cookout.

Soda is a mandatory part of every barbecue ever. This is stupid, because it attracts yellow jerkbags jackets to the picnic table, placing everyone in grave danger.  Bumble bees and honey bees are just in it for the pollen. Yellow jackets are like the asshole Aqualish in the Mos Eisley Cantina who picks a fight with Luke Skywalker for no damn reason. Or, because fighting. Basically, the fact that they were in the same location is enough. Either way, Obi Wan Kenobi slices his arm off, and it’s all good. Unfortunately, I live in Massachusetts, and there is no Obi Wan Kenobi here to come kill the yellow jackets with his lightsaber. So, it’s only common sense not to have soda at a picnic, when you don’t have a Jedi to defend you from the consequences.

Unless it’s garlicky, olive oil-soaked Italian potato salad, potato salad is something that mostly sucks anyway. So that’s already a strike against both it and summer, which is when it comes out of hibernation to give us salmonella.  Enter potato salad roulette. How long has it been out? Are you willing to risk it? YOUR LIFE IS ON THE LINE.

When meat is ground, the bacteria sitting on the outside mixes with everything else in squishy meat curls. That means that the inside of a hamburger needs to be cooked to well done. No, it’s not 1000% percent definite that someone will get food poisoning if they eat a bit of meat that’s still pink. But is it worth the risk? Not really, in my book, and I happen to prefer my burgers blackened anyway.

Most of the cookouts I’ve been to in the last two years have had undercooked hamburgers. And not all cooked by the same person either. There have been four culprits. If I so much as mention that the meat is undercooked, I’m told it’s ok, and I’m over worrying. It’s like being the only person in a movie who sees the whole conspiracy, and everyone is just trying to silence me.

Gym class volleyball always turned me into an exemplary Apathetic Loner Girl, Daria style. In my eyes, the other kids didn’t seem to grasp that there was no reason to get excited over, or invested in the outcome of the game. To me, it was perfectly acceptable to watch the ball fly by instead of bothering to try hitting it. The gym teachers didn’t care, but my team mates were not cool with this, and they let me know. With gusto. Or zest. Also, yelling.

Volleyball went from a slightly fun game that I had no enthusiasm for, to something more akin to post-traumatic stress disorder.

Plus, it’s not something I want to attempt while suffering the consequences of potato salad roulette.