Why Tarot Cards are Awesome

For someone who’s decidedly not into New Age* things, or into spending money on anything, ever, I own a lot of freakin’ tarot cards. Three-hundred and twelve, to be exact. Four decks. Why do I own so many tarot cards? Because they are awesome. Here’s why. 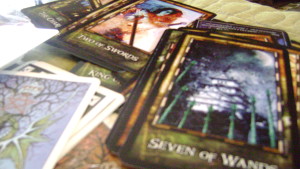 Well, tarot cards, when you put it like that, I am NOT sorry for what I did, and I will NEVER apologize for eating the last of the chips.

Usually if I need to make a decision about something, I will make a pro-con list. And I don’t mean just for big decisions like: “should we take that apartment?” and “is it worth the money to buy a new computer?” and “face tattoo?” No, I will even make pro-con lists for things like: “brownies or cookies?” and “play KOTOR or read a Star Wars novel?” and  “draw sketch of face tattoo, or excise the thought from my mind?”

Usually, the pro-con list works for me. When things come out a little too even, sometimes tarot cards can help me make the decision. By throwing out a bunch of cards, all the different images and meanings can give me a new angle on whatever I’m mulling over. It’s like talking to a friend to get a new perspective, only you don’t need to have a friend.

In the same way, if I’m stuck on a piece of writing, tarot cards can throw some new angles into the mix. 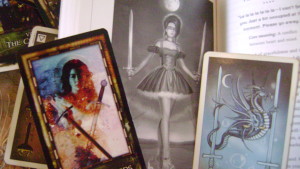 Three interpretations, one card. These are the Two of Swords from the Archeon Tarot, the Steampunk Tarot, and the Dragon Tarot.

A deck of tarot cards contains 78 miniatures pieces of artwork.

I like artwork, and also can’t afford artwork, aside from whatever I’m able to make myself. What fascinates me about collecting different decks is that every deck has the same cards, so it’s interesting to compare different artists’ interpretations. Or even multiple interpretations by the same artist.

Finally, on a good day, I can trick myself into thinking that tarot cards are actually mystical occult tools rather than mass-produced pieces of card stock. I’m a skeptic, but would rather live in a world where ghosts are real, and the mysterious forces of the universe can communicate with me though rectangles of tree pulp.

For maximum tricking, make sure to conduct all your tarot activities atop occult fabric. 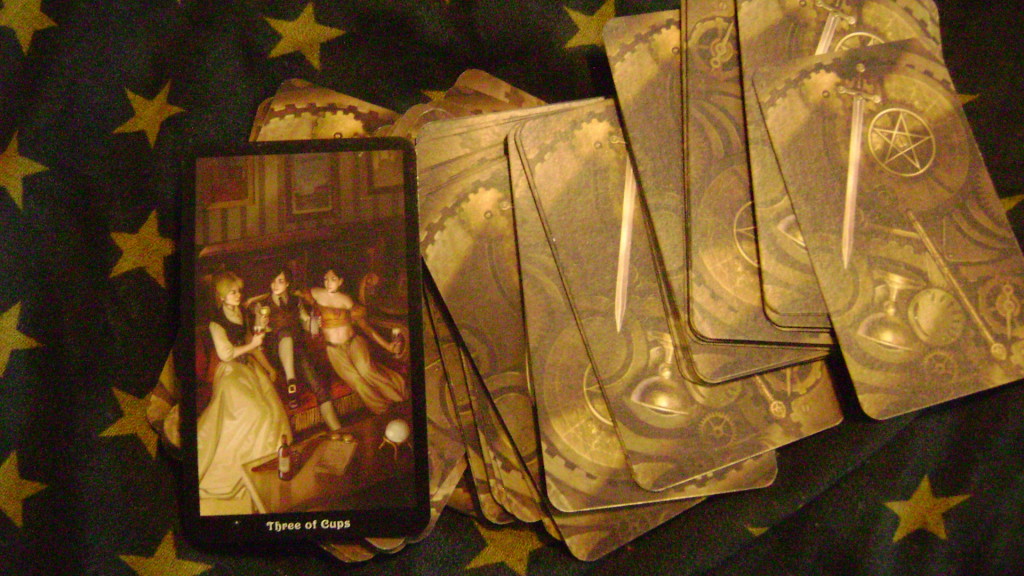 It’s ok if your “occult fabric” is actually just some scarf you bought at Target one time. Again, the Steampunk tarot.

*In  editing this post, I noticed the typo “Sew Age.”  If you are so inclined, I think this would make an appropriate title for a fanatical magazine on sewing, one that takes the view that the apocalypse is nigh and the age of sewing all our own clothes is upon us.  Features could include the column “Notions on Notions” which discusses the best way to stockpile zippers, and whether two-hole buttons or four-hole buttons are likely to become a valued currency.