A few years ago, I picked up Please Kill Me: The Uncensored Oral History of Punk on the used book shelf at the grocery store. We put it on our cinder block bookshelf next to our Star Wars books and our giant thesaurus, and whatever other books we have on display in our living room that we think make us look cool, but actually do the opposite. 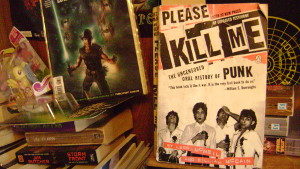 Please Kill Me thinks it’s cooler than the other books on my shelf. Even the Star Wars ones.

For years, music books were among the few types of nonfiction that could hold my attention through a few hundred pages. One day, I picked up Please Kill Me on a whim and read a few pages. I remained hypnotized in its pages until I finished it.

There’s less about the music itself than I would like, and the focus is on a fairly small number of bands. Plenty of TMI moments as well. However, it stitches together direct quotes so seamlessly that sometimes it doesn’t feel like reading separate voices. And despite the overwhelming number of people whom I’d probably hate if I met them in real life, it really conveys the living community of the New York punk scene, and it makes me want to be there. It reminds me of how important community is.

I wanted to share this quote from Legs McNeil, one of the authors of Please Kill Me (from page 334):

“Overnight, punk had become as stupid as everything else. This wonderful vital force that was articulated by the music was really about corrupting every form—it was about advocating kids to not wait to be told what to do, but make life up for themselves, it was about trying to get people to use their imaginations again, it was about not being perfect, it was about saying it was okay to be amateurish and funny, that real creativity came out of making a mess, it was about working with what you got in front of you and turning everything embarrassing, awful, and stupid in your life to your advantage.”

At its best, punk wasn’t about studied coolness or meticulous safety-pinning. It was about doing shit. Kicking down doors. It was refusing to be stopped by roadblocks on the obvious path in front of you, roadblocks that say “you can’t go here,” and taking that DIY spirit and making your own road out of salvaged bricks and broken glass and a found bucket of tar*.

That quote reminds me to make my own damn artwork to hang in my apartment rather than to buy manufactured art from Target or someplace, and to make that artwork out of subjects and materials I like rather than worry about getting things a certain way. It’s better to do something creative and true than it is to make the place you live a poor copy of something in a magazine.

It reminds me of why I’m going to help make a new wooden table top for what used to be a glass deck table but, thanks to an incident** that qualifies as “embarrassing, awful, and stupid,” is currently just an empty frame sitting on a sad deck.

It reminds me to write the things that I write, and that the things I write usually have to start out as a mess.

It reminds me to experiment and do things and learn, because so, so many people do not do things, only consume them. It reminds me that the biggest difference between many of my bad days and my good ones is that I did real things on the good ones. I made life up for myself.

*You can tell I know a lot about making roads.
**We didn’t buy a base for our umbrella because we didn’t like any that the store had. We knew we needed to get one, but the umbrella didn’t blow away, which sort of caused an idea to creep into our heads—an idea that maybe we didn’t need a base after all. Sometimes, we left the umbrella open, though we knew not do this. But again, nothing tragic happened, and another idea crept into our heads—an idea that it’s probably not the end of the world if we leave the umbrella open sometimes. One day, we came home to find that our umbrella had nearly blown off the deck in a big gust of wind, and a pile of tempered glass pebbles sat underneath what used to be our table top. And we knew better.