I carried Touching from a Distance around in my backpack for most of my senior year of high school, and even I don’t think this needs to exist.

“What do you despise? By this are you truly known.”

When I first read that quotation in Dune twenty years ago, it struck me as something true and profound. It’s been incorporated into my worldview so long and so thoroughly that I don’t always notice the words themselves, even if they’re there at the back of my mind.

It’s one metric by which I judge others and myself, and it’s something that’s been in my head a lot lately not only because I am re-reading Dune and realizing what a formative book it was for me, but also because of everything going on in the world right now.

We live in an age of militant, polarized opinions. Some people share their opinions online; others go out to protest. Either way, this is always the question I ask.

The Little Engine That Could is female! And so is the red engine who breaks down on her way to bring toys and food to children. I didn’t remember this book well, so I was surprised to find this out when I started reading it to my toddler.

Incidentally, all three engines who refuse to help are self-important dudes. Well, one of them is actually an old, tired dude. His depression-era exhaustion makes me sad.

It makes me wonder if there is an intentional message hidden in the Dude-Engines’ unwillingness to help with the female task of making sure children are taken care of.

The connection between chocolate and depression in real life:

“I’ve had mild, pervasive depression for two weeks, but since science says this 85% dark chocolate bar can raise my serotonin, I’m waiting for a barely perceptible lightening of my mood.”

The connection between chocolate and depression in Harry Potter:

“A dementor gave me depression so hard my soul almost ripped out of my body, but I ate a chocolate bar that’s been sitting in this guy’s jacket, and now I’m a thousand times better.”

When does reading more books cease to to have any benefit and turn into consumption for its own sake? The other night, while trying to get through even half an episode of The Handmaid’s Tale, my partner and I instead discussed this and how some books are better suited to slow reading.

Wanderlust: A History of Walking by Rebecca Solnit is such a book. It’s dense with history and beautifully written, with plenty of lines worth lingering over, and really thinking about. I started reading this book a couple years ago, before I got past my underlining phobia, and I knew it would be worth revisiting, pencil in hand.

I’m looking forward to the later chapters, which go into city design and feminism, but between reading seven other books and deliberately going through this one slowly, it’s probably going to take months. 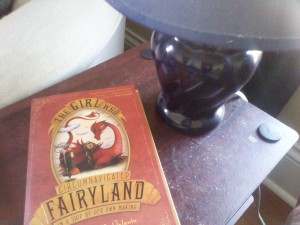 It’s on my bedside table because it’s a good book to read in a cozy place.

I recently read The Girl who Circumnavigated Fairyland in a Ship of her own Making, by Catherynne M. Valente. The book is endearing right from the beginning, but even more so after the main character, September, meets a wyverary, a creature who is half wyvern and half library (on his father’s side). How could I not love that?

Shortly after, there is a passage about a bathhouse run by a soap golem named Lye.  It sums up a lot of what I loved about the book:  that it is adorable, whimsical and imaginative, yet so smart at the same time.  In the first few chapters, I thought the book was mostly smart in the sense of cleverness, but the baths September goes through show how much wisdom is in the book as well.

September first has to go through a Bath of Courage (it’s not called that in the book, at least not with the capital letters), in which she is washed of the various fears that accumulate throughout life. Valente describes the process of courage-washing, in rich language, lyrical yet simple.

Realizing how much fear has influenced my adult life, and trying to change that, has been a huge undertaking in the latter half of my twenties.  In fact, due to anxiety after anxiety, it took me nearly a year to fill out the About Me page on my own website.  Lye the soap golem informs September that the service of courage-washing is difficult to come by in our own world. Very true.

The bath in which Lye helps September wash her wishes resonated with me in a similar way:

The water of the bronze tub gleamed icy and green, redolent of mint and forest nights and sweet cakes, hot tea and very cold starlight.

“This is for washing your wishes, September,” said Lye, breaking off another of her fingers with a thick snap. “For the wishes of one’s old life wither and shrivel like old leaves if they are not replaced with new wishes when the world changes. And the world always changes. Wishes get slimy, and their colors fade, and soon they are just mud, like all the rest of the mud, and not wishes at all, but regrets. The trouble is, not everyone can tell when they ought to launder their wishes. Even when one finds oneself in Fairyland and not at home at all, it is not always so easy to remember to catch the world in its changing and change with it.”

I think that the idea of washing your wishes is a creative way to rephrase a wise piece of advice: that wisdom comes from accepting the world as it is, and acting accordingly.

In The Legend of Korra, one of my all-time favorite TV series, cartoon or no, Tenzin gives Korra this same advice. And it’s easy to gloss over when Tenzin says it, because, yeah, whatever, Tenzin is super wise and stuff. He’s saying wise things all the freakin’ time, so it’s easy to overlook the true gems and give them their due. But reading Lye’s version of this idea, and how September processes it, brings the point home.

Like dealing with accumulated fear, this is another piece of advice that has been hard-won in my own life, and I hope Valente succeeded at passing on that wisdom to younger readers.